There's a lot going on at Montecito Water District! Here are some updates on a number topics that are important to our community:

(Note:  Rates have not increased since 2016; in 2013 the Board adopted a five-year schedule of rate increases, then voted not to implement the final incremental increase in 2017.)

The Water Availability Charge (WAC), a vital revenue component of MWD’s capital improvement program, continues without change—as it has since its inception in 1996. MWD’s July 23, 2019 public hearing and ultimate adoption of a resolution to continue the WAC is an annual requirement under California Water Code, and is separate and distinct from the ongoing rate study. This parcel assessment of approximately $30 per acre supplies the District with an estimated $300,000 annually for the replacement of vulnerable, aging, and undersized water mains to improve the reliability of the District’s distribution system. Upcoming projects include the Santa Rosa Lane Main Replacement.

The Montecito Groundwater Basin benefitted from a 2018-19 winter of above-average rainfall yet remains well below “full” aquifer conditions, according to data collected for the Semi-Annual Groundwater Monitoring Program Report.

Separately, the Montecito Groundwater Basin Groundwater Sustainability Agency (GSA) has begun holding regular quarterly meetings. More information can be found at montecitowater.com/sgma. Well owners and other interested parties are encouraged to get involved and can sign up for the GSA email updates online or by calling 805.969.2271.

MWD and the City of Santa Barbara approved proposed terms of a Water Supply Agreement earlier this year, and are in the process of finalizing some additional terms and drafting a 50-year contract. The Water Supply Agreement is targeted to be ready for review later this year, and will be made available for public comment prior to being voted on by the governing bodies of both agencies.

RECYCLED WATER / WATER REUSE: MWD continues to move forward with the top project recommended by the Recycled Water Facilities Plan, that is non-potable reuse (NPR – irrigation only) for large irrigation users with the option of indirect potable reuse (IPR – groundwater injection) pending a hydrogeologic investigation of the Montecito Groundwater Basin. Questions circulating in the press and community have expressed concern regarding targeted end-users and project costs. It is important to note that:

A Groundwater Augmentation Feasibility Analysis is underway to determine if the Montecito Groundwater Basin can receive injection of water, and results are anticipated before the end of the year. Whether NPR, IPR, or a combination of the two, the project is targeted to use wastewater collected and treated by Montecito Sanitary District. The Districts are collaborating to determine the best approach to water reuse for the community, and a public joint committee meeting including staff and two directors from both the Water and Sanitary Districts is being held monthly.  For dates see the District Calendar, and for more information visit the MWD News Page. 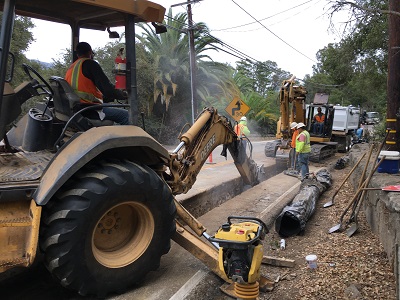 Capital Projects, funded in part by the Water Availability Charge (WAC), increase the reliability of the water delivery by improving MWD’s aging infrastructure. Some pipes date back to 1920’s when the District was founded!