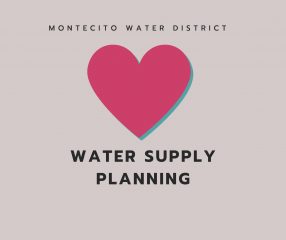 This time last year, we were “loving the rain,” but as a dry January stretches into a dry February, Montecito Water District customers are eager for status updates on the Water Supply Agreement with the City of Santa Barbara and the new Rate Study.

Status: Long-Term Water Supply Agreement with the City of Santa Barbara
Still on schedule as reported in October, a draft contract is targeted for completion in spring 2020. Commonly known as the “Desal Deal,” the 50-year water supply agreement being written by MWD and the City is based on mutually agreed upon terms. When finalized, the draft contract will have a publicized public review period and go before the governing bodies of both agencies for final vote of approval.

Regional cooperation is the foundation of the agreement, which guarantees purchase and delivery. This predictability will increase resiliency for all served. Reliability is key for MWD as it plans for the future, and all current Board members have voiced support for executing an agreement.
According to MWD Board member Brian Goebel, “We know what we want and what we don’t want. We want to have a proactive plan that ensures local reliable supplies at a guaranteed cost. We don’t want our supply or our rates to fluctuate. And we definitely don’t want to resort to the emergency measures the Board had to resort to in the past, such as implementing an emergency surcharge, and being an emergency buyer in the spot market. Desalination is a sure thing - something we can plan on in an uncertain future.”

Status: Cost of Service Study & New Rate Structure
In January MWD started working with Raftelis Financial Consultants with the goal of having new rates in place by the start of the new fiscal year in July, 2020. New rates will not be adopted until after there has been a public review and input period, and a vote has been made by the Board. We anticipate that a proposed rate structure will be ready in late May / early June for public review and comment. In preparation, dates have been set for two working Board meetings: March 2, 2020 and April 7, 2020. All meetings are public and the most current calendar information and agendas can be found here.

The last rate study was performed in 2013 and the last annual rate increase took place in 2016, Rates are anticipated to increase somewhat in the face of inflation, needed infrastructure improvements, and securing a more reliable water supply. The Board continues to assure the public of their commitment to minimizing increases and promoting conservation, while also ensuring adequate water supply for the future. “Montecito Water District went into the last drought with no clear plan in place, and the customers paid the price with allocations, penalties, and a meter moratorium. Many customers were alienated, and they responded by drilling wells. We don’t want to see that happen again, and we are committed to implementing plans put in place (by current management and board) that will serve the community far into the future,” says Floyd Wicks, MWD Board President.

The Heart of the Matter: Water Supply Planning
As MWD plans for future water supply, major considerations include the impacts of climate change on water supply availability, the severity of the recent drought, certainty of future droughts, and compromised capacity in Lake Cachuma and Jameson Lake due to the impacts of the Whittier and Thomas Fires. Consistent with reports across the industry, experts from Westwater Research have advised MWD that it will be increasingly difficult to buy water on the spot market - the District's "go-to" source during prior droughts.

MWD Board and staff have been rigorously reviewing risks, costs, and benefits of water supply alternatives in order to develop a sound plan that will meet the District's ongoing needs. MWD has also hired Steve Bachman, PhD to prepare an update of the District’s 2007 Future Water Demand & Water Supply Options Report. “The District will be facing critical decisions in the coming months and years that may have significant impacts on water supply availability for the community,” says General Manager Nick Turner “The updated report will serve to help inform the District’s near-term decision regarding participation in a long-term water supply agreement with the City of Santa Barbara as well as its preparation of a 2020 Urban Water Management Plan, set to begin in mid-2020.”

MWD continues to reduce its reliance on rainfall-dependent sources and manage supplies so it won't be as vulnerable as it was during the last drought. Examples of current initiatives include:
• Groundwater Banking (2,000 Acre feet was banked with Semi-Tropic in 2018 & 2019. This supply was from MWD’s State Water Project allocation, and is now secured for future use.)
• Groundwater Recharge (MWD is resting wells – not pumping – while surface supplies are adequate to allow for continual recovery of the groundwater basin.)
• Negotiating a long-term water supply contract with the City of Santa Barbara (A drought-proof supply with guaranteed deliveries that provides a regional approach to water supply management.)
• Pursuing Water Reuse / Water Recycling (MWD is collaborating with Montecito Sanitary District to implement projects that would recycle water at cost-effective volumes.)

So this year, while we still have some hope for rain, we are loving the plan to continue diversifying in favor of more local, reliable supplies. 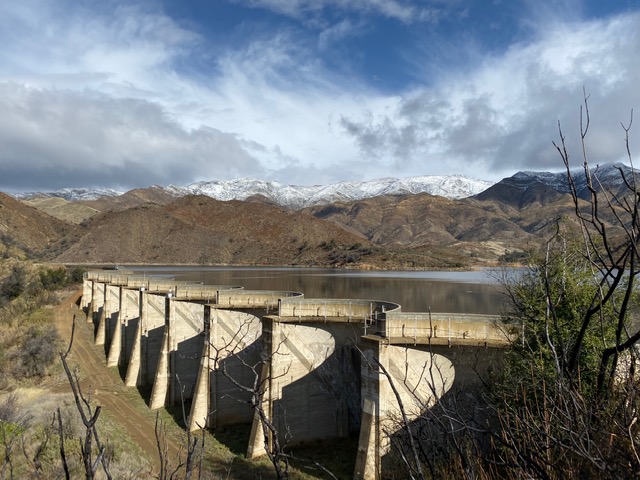 Caption: Jameson Lake is currently at 80.8% capacity, but holds about 30% less than it did when first built. Water supply and storage capacity was most recently reduced as a result of the 2017 Thomas Fire and 2018 Montecito Debris Flow. Montecito Water District received a settlement of approximately $8 million from Southern California Edison, some of which will offset costs for securing future water supplies.

Founded in 1921, The Montecito Water District serves a population of approximately 13,100, providing water to more than 4,600 customers. The Montecito Water District's mission is to provide an adequate and reliable supply of high quality water to the residents of Montecito and Summerland, at the most reasonable cost. In carrying out this mission, the District places particular emphasis on providing outstanding customer service, conducting its operations in an environmentally sensitive manner, and working cooperatively with other agencies. For additional information visit montecitowater.com.